On the situation in the YHRM Network
Andrey Yurov: The Three Things We Need
Take part in action days of solidarity with “The Crimean Hostages”
Human Rights in Armenia 2014 Report
Crimea Is Clamping Down on Human Rights

In January 2020 the Coordination Council of the International Youth Human Rights Movement made a decision to close the Network, triggering a discussion about that decision among YHRM participants.

In the 20 years of its existence the YHRM Network has introduced tens and hundreds of young people in Eurasia to human rights movement, and a number of YHRM participants in Belarus, Kazakhstan, Russia, and Ukraine continue human rights work in their countries’ leading organisations. Despite the fact that some of the projects and initiatives launched by the YHRM kept running and some of its participants continued their human rights and civil work in the past few years, the Network itself ceased to exist as an actually functioning community. It became obvious that the Network’s participants had to move on and the Youth Human Rights Movement had to make room for new initiatives and groups.

The discussion about the Network’s closure among its participants coincided with the making of allegations against Andrey Yurov, one of the founders of the Network and its Honorary President until 2019, whose actions towards his colleagues and seminar attendees crossed the boundaries of professional and human ethics. Andrey Yurov had neither actually nor nominally been a part of the Network’s management and activities for several years, but we are truly sorry that his actions might also have taken place within the Network’s space. We are deeply shocked by the information which is being revealed and genuinely sympathise and empathise with those who have been affected by those actions.

It is becoming obvious that the Network’s closure without any response to current events would be impossible. This situation is currently being discussed among YHRM participants. The co-chairs of the YHRM Coordination Council suggest creating an independent contact group of professionals who are not involved in the situation to allow for submitting information about any relationships within the Network that resulted in trauma and find ways to help those who went through such relationships. It also appears important to discuss the standards and principles that could help to avoid similar situations in different groups and communities working in human rights and/or civic engagement. We would be truly grateful for any advice or help in this matter.

It grieves and pains us that the Network’s story has to end on such a sad note, but we want to believe that those hundreds, or even thousands, of activists from different countries who have worked in or collaborated with the YHRM over the years will also remember the bright and happy pages of its history associated with our shared successes, solidarity, and mutual support.

Today, we pulish the speech he delivered during the ceremony a year ago at the Hague. 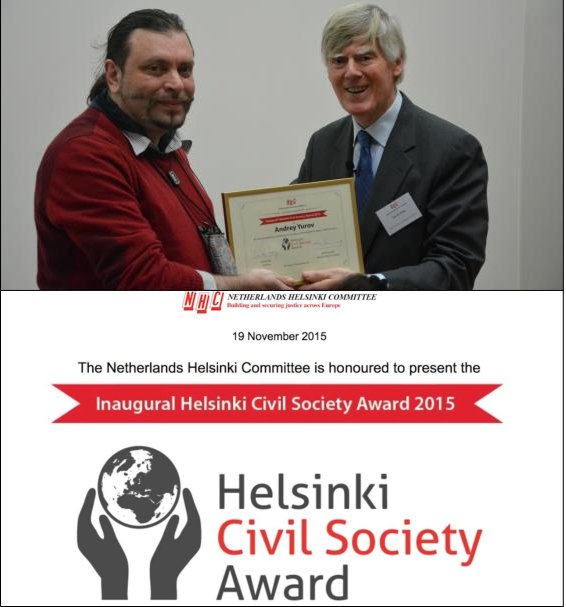 The first thing we need is solidarity of all the people defending our civilization by promoting values of humanity.

It is a special honour to receive the award in the year when “post-war” world order, the world order which has placed Human Rights above national sovereignty, celebrates its 70th anniversary.
70 years ago, humanity agreed that, to be able to prevent genocides and mass human rights violations, some universalities must be put higher than governments and states.
This also included solidarity in fighting against “double standards” and the approaches which valued any political or economic interests higher than the universal values.
The tragic events we have recently witnessed in Paris, Lebanon, Turkey, and in the sky above the Sinai peninsula, urge us to jointly embark upon the search for systematic and humane answers to the challenges posed by violence and terror.

The second thing we need is solidarity of all the governmental and nongovernmental institutions of the OSCE region in strengthening joint standards and mechanisms of Human Rights defense.

Thus, it is a greater honour for me to deliver the speech in the year of the 70th Anniversary of the United Nations, and of the 40th Anniversary of the OSCE.
Some 20 years ago, it could have seemed that improving Human Dimension standards was a matter of technology, not ideology. But now we know that we are still in the very beginning of the route.
Not only do we see many of the Human Rights institutions failing to work properly -- what we are now becoming witnesses of is numerous attempts to revisit original approaches. This means that the fate of our region depends on the strength of our will to improve current and to establish new institutions for Human Rights defence.

The third thing we need is solidarity of civil societies, their mutual help and support.

This award demonstrates said solidarity on side of the civil society of the Netherlands. Thus, it is a greater pleasure for me to stand here together with Arzu whom I know for more than a decade.
In the upcoming years, both courage and creativity will be needed. We will have to search for brand new approaches to the work we do, we will have to react to new challenges.
Whether or not we are able to change our part of the world for the better in the foreseeable future, depends on our ability to act together for the good of Human Rights.
Thank you.
4th August in the world. Results of the action
08.08.2013

Thousands of people around the world joined the International Day of Solidarity with Belarus civil society. Human rights defenders, civil activists, politicians, artists and ordinary citizens from 15 countries of the world took part in actions of solidarity on 4 August.

24.05.2016
Take part in action days of solidarity with “The Crimean Hostages”
Oleg Sentsov, Olexander Kolchenko, Hennadiy Afanasiev and Oleksiy Chyrniy have been held in Russian jails for two years already under fabricated charges of ‘terrorism’. We consider it being necessary to express solidarity with those who are persecuted due to their pro-Ukrainian views, civic stand and desire for freedom in Russia-annexed Crimea.
07.02.2015
Human Rights in Armenia 2014 Report
Helsinki Committee of Armenia has published “Human Rights in Armenia 2014” Annual Report. The report reflects on the Right to Freedom of Speech, Freedom of Peaceful Assembly and Association, Torture, Inhuman or Degrading Treatment, Political Persecutions, Freedom of Conscience and Religion, The Rights of the Child, Protection of Labor Rights.
03.02.2015
Crimea Is Clamping Down on Human Rights
«We have a few questions for you,» a border guard told Sinaver Kadyrov, a Crimean Tatar activist, at the Armyansk checkpoint in northern Crimea on Jan. 23. Kadyrov was on his way to Kherson, in southern Ukraine, to fly to Turkey for medical treatment. It was the beginning of an ordeal that ended with a local court expelling him from Crimea, his home of almost 25 years.
END_OF_DOCUMENT_TOKEN_TO_BE_REPLACED